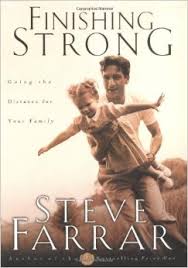 Chuck Swindoll, in Steve Farrar’s book Finishing Strong shares his thoughts on why Joseph gets so much attention in the book of Genesis. His thoughts are helpful and challenging.

No one who does a serious study of Joseph’s life would deny that he was a great man. And yet he never accomplished any of the things we normally associate with biblical greatness. He never slew a giant. He never wrote a line of Scripture or made any vast prophetic predictions like Daniel. Come to think of it, Joseph never even performed a single miracle. He was just your typical boy next door, who grew up in a very troubled family.

So what made Joseph great? Why does God devote more space in Genesis to his story than to any other individual’s? Because of Joseph’s attitude, how he responded to difficult circumstances. That was the most remarkable thing about him.

American author Elbert Hubbard once wrote, ‘The final proof of greatness lies in being able to endure (contemptuous treatment) without resentment.’ Joseph spent a good deal of his life enduring harsh, hateful treatment, and his attitude during those years offers indisputable proof of his greatness.