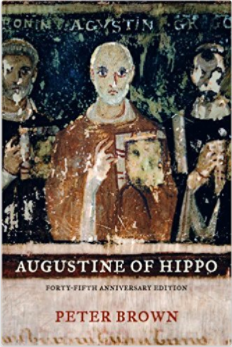 Biographical Sketch of the Author

Writing a biography of a monumental figure such as Augustine is no small task. Augustine stands atop the mountain of Christian theology. It seems fair to say that Christian theology has stood on the shoulders of Augustine through the ages. Therefore, writing a book that traces the outward as well as the inward development of such a man, particular tracing such things throughout Augustine’s course of life, requires intimate familiarity with the man and his works. Peter Brown is such a man.

Brown is Philip and Beulah Rollins (emeritus) Professor of History at Princeton University and is a graduate of Oxford University. He has lectured in the area of history at numerous places, including All Souls College, Oxford. Brown is also credited with “having created the field of study referred to as late antiquity (250-800 A.D.).”[1] In addition to his biography on Augustine, Brown has authored numerous books, including Through the Eye of a Needle: Wealth, the Fall of Rome, and the Making of Christianity in the West, 350-550 AD and The Ransom of the Soul: Afterlife and Wealth in Early Western Christianity.

Brown brings an intimate knowledge of this era of history to bear on the life of Augustine. He is able to present to the reader not only the theological giant of Christian theology, but also Augustine, the historically situated man. That is, we are not simply introduced to the theology of Augustine, but we meet the man who lived and breathed in a world full of change.

Summary of the Contents

In the Chronicles of Narnia C. S. Lewis introduced us to Aslan. In The Lion, the Witch, and the Wardrobe, Aslan is “on the move.” Brown presents Augustine in a similar fashion. He is, indeed, a man on the move. Brown writes, “Not only did Augustine live in an age of rapid and dramatic change; he himself was constantly changing” (Brown, ix). Augustine is changing on multiple fronts.

These changes were both inward and outward. In other words, Augustine is a man whose soul is on the move, moves intellectually as he seeks wisdom, and undergoes a change of beliefs over time. While he is moving inwardly, the world around Augustine is busy changing as well. The Roman world Augustine knew at birth (A.D. 354) is not the Roman world he knows when he goes to his deathbed (A.D. 430). Therefore, Brown seeks to give “some impression of the subtle overlapping of the differing levels of change…to [help the reader] glimpse a figure in so distant a past” (ix). That is, Brown hopes to show how the inner and outer changes overlap in the life of Augustine. If we glimpse the overlapping changes, then perhaps we progress in understanding this giant of a man.