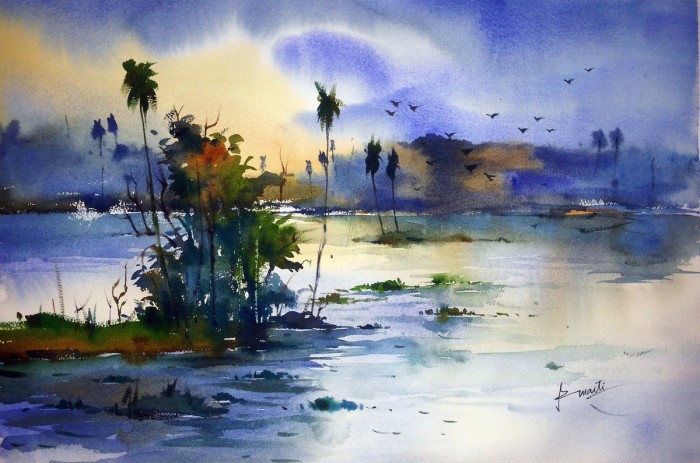 Think of the Last Supper by Leonardo da Vinci. It tells the story of Jesus and his disciples sitting down for the final meal before the crucifixion. Jesus would drink the Passover cup before being sacrificed as the Passover lamb.

The good news of Jesus is more than a story. But it’s not less. It is the most important story on the planet. And it is the truest of true stories. Many have attempted to paint pictures that rightly tell the story of the gospel. Sometimes these paintings are painted with words, instead of paint and a canvas.

These gospel paintings are often necessary because the gospel must be explained. It is a message made up of propositional truth. That means it must be understood. John Piper writes, “the gospel is not only news. It is first news, and then it is doctrine. Doctrine means teaching, explaining, clarifying. Doctrine is part of the gospel because news can’t be just declared by the mouth of a herald—it has to be understood in the mind of the hearer” (Piper, God is the Gospel, 21).

In order for hearer’s to understand the gospel, a number of different word pictures have been painted. Some compare the gospel to paying your speeding ticket, or serving your prison sentence. Like creation itself, the word-pictures available are gloriously endless.

One such picture is that of amnesty. The good news of Jesus is compared to a government, possibly a king, declaring amnesty to those who have committed a crime against the state. The question is whether or not the picture of amnesty is the best picture to paint.

According to Merriam-Webster, amnesty is defined as “a decision that a group of people will not be punished or that a group of prisoners will be allowed to go free.” Most often this term is applied when the group declaring amnesty is a form of government. So, Merriam-Webster offers a second definition: “the act of an authority (as a government) by which pardon is granted to a large group of individuals.” The government forgets the crime and offers absolution.

The Encyclopedia Britannica offers an online article that further develops the picture:

“Amnesty. in criminal law, sovereign act of oblivion or forgetfulness (from Greek amnēsia) for past acts, granted by a government to persons who have been guilty of crimes…Technically…amnesty differs from a general pardon in that the latter simply relieves from punishment whereas the former declares innocence or abolishes the crime.”

Amnesty, as commonly understood, is a declaration by an authoritative body (e.g., Congress, or King, or President) to abolish a crime (or crimes) and forget that it had ever occurred. There are no penalties or punishments or justice to be meted out for crimes committed.

AMNESTY AND THE GOSPEL

If amnesty means that there is no punishment, penalty, or justice meted out, can we assume that this word-picture is a good explanation of the gospel of Jesus Christ? Well, it is a picture, and it paints some of the truth. But, as with all attempts to paint the gospel-picture in words, it is an incomplete picture at best.

There are positive elements to the amnesty picture. The gospel is news that the Great King of the universe has removed our sins as far as the east is from the west (Ps. 103:12). God has declared that rebels will roam free. He has mercifully decreed that his people will not be punished. God has spoken the verdict of “not guilty” over law-breakers in his realm. As far as amnesty helps us to see these gracious truths, then it’s a good picture and tells a good story.

However, the picture amnesty supplies is incomplete. The painting isn’t finished because it doesn’t tell the whole story. More paint needs to hit the canvas. What is missing from the picture is the concept of justice. When the government offers amnesty, they offer absolution without the exercise of justice. No payment is rendered, no punishment experienced. The crime is simply not addressed. If justice is red, then the amnesty painting lacks redness.

The gospel, however, is stunningly different on exactly this count. The picture of the gospel includes both absolution and justice. In the gospel, mercy and justice come together. Our Sovereign Lord has taken our sins and placed them on the shoulders of another (Isa 53:4, 5; Matt 8:17; 1 Pet 2:24). The substitute bears the penalty for our crimes (i.e., sins). Justice is upheld.

Do you see the difference? The gospel is a fuller, brighter picture than amnesty. Amnesty lacks color because it fails to include the redness of justice. The redness of justice makes its way onto the canvas in a true and complete picture of the gospel. And in the painting of the gospel, justice is painted onto the shoulders of Jesus. This is why Paul can write that God is “just and the justifier of the one who has faith in Jesus” (Rom 3:26).

THE CROSS: WHERE JUSTICE AND MERCY MEET

In the gospel, we announce to the world that there is freedom and full forgiveness for crimes committed against the King of the Cosmos. We declare to the prodigal son and the proud older brother that they can both find grace and mercy with no cost to them. Yet, as we consider the doctrine of the atonement and the source of our pardon, we must remember the cross is where grace and justice meet.

Freedom and forgiveness come at a high price. A price the Great King has paid. He set forth his own Son to pay the penalty by dying in our place. Our wrath-inducing guilt cannot simply be whisked away as the amnesty may lead some to believe; it must be propitiated. And on the cross, this is exactly what Jesus did.

He satisfied the justice of God by demonstrating the love of God by dying in the place of sinners. That’s a fuller and brighter picture of the gospel.

It is a picture that includes colors of absolution and justice.

A picture worth painting with ten thousand words.