Twitter is a horrible place to dialogue about serious matters. Space is simply too limited to allow for careful communication. Blogs are a bit better, though pitfalls still exist.

What is often missing in a tweet is, far too often, nuance and precision. Because of the space limitations, lucid brevity is a challenge. Therefore, I have found serious conversations are rarely encountered in the Twittersphere (I’ll save the vitriol created by Facebook for another day).

Sometimes, people make emotionally charged statements that obscure an idea. I’d venture to say that often times, the people who make such statements know exactly what they are doing when they take nuanced positions and misrepresent them. That’s deceptive and deceitful and wicked.

For example, John Piper recently offered his take on whether or not women should serve as seminary professors (read or listen here). Piper has written for decades on complementarianism. His writings are usually nuanced and thoughtful. Though you may disagree with him, it will require sustained thought to wade through his arguments on almost anything.

In regard to the issue at hand, Piper does not believe women should be professors in seminaries. Why? Basically, because seminaries are places to train pastors. In his view, that is the work of other pastors, an office reserved for men who meet the qualifications for elders (e.g. 1 Tim 3:1–7). You can read his arguments for yourself. I’m not sure I agree (and I studied at Bethlehem College & Seminary!), but I am not quite ready to challenge the Chancellor.

What I want to point out is how Rachel Held Evans (RHE) responds. It is a model of how not to disagree with someone. She makes some statements that are verifiably false and thus misrepresents Piper.

Pay attention to her words. 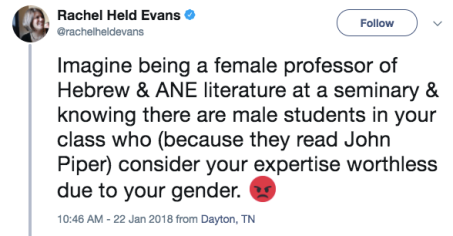 There are two ways to read RHE. First, this is a careless use of words. Again, Piper’s position does not imply female perspectives are “worthless.” Furthermore, this issue is addressed in numerous of his writings elsewhere (see this book). The other way to read her statement is to see RHE carefully choosing her words in order to stoke the fire.

Second, in the next tweet, she makes the audacious claim that complementarians (in general) believe “women are fundamentally incapable of teaching men anything about faith, Scripture, & the Christian life” (emphasis added). I’ve never met one complementarian who asserts this. Furthermore, nowhere does Piper state women are incapable of teaching anything about faith, etc. This, again, is either tremendously careless or carefully crafted in order to create more heat than light.

Third, in her final tweet in the thread (as far as I followed), RHE seems to indicate that the position advocated by Piper, particularly his form of complementarianism, means women are “systematically excluded from all forms of leadership and influence.” This, again, is not a fair representation of the position Piper takes. Piper answered a question about female professorships, not female leadership categorically.

In the end, one way to read RHE is to see her providing an example of carelessness with words and uncharitable in disagreement. Another way to read her is to see her carefully choosing her words in order to stir up emotions and controversy.

Which way to read RHE on this point is not something I can conclude definitively, because I cannot see the depths of her heart and discern her motives. What I do know is that words matter. Honest dialogue and disagreement require a careful and honest use of language. What RHE does in her tweets is the exact opposite. Thus, it is hard to take her seriously when she writes in this manner.

For a more honest, charitable, and fair response, you can read Michael Bird over at Patheos.

Again, I’m not sure I land with Pastor John on this point. Yet, before I’d argue for another view, I’d take my time to faithfully and honestly represent the view I’m challenging and then carefully argue for my own.

Let’s be careful and honest with what we say (or type).