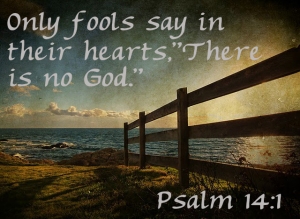 “The fool says in his heart, ‘there is no God'” (Psalm 14:1). Most quote this verse as a proof-text for those that declare themselves to be atheist. However, this verse isn’t a philosophical declaration that God doesn’t exist but rather a confident affirmation that God is unconcerned about how men live morally and ethically. God is to be discounted from everyday life, hence the way that a person in Psalm 14 lives:

If these verses sounds familiar it’s because the Apostle Paul takes the truth in Psalm 14 that those who oppress God’s people are guilty of the above-mentioned description and applies it to every man, woman, boy and girl. Romans 3:23 speaks to this: “for all have sinned and fall short of the glory of God.” The “all” there is comprehensive.

But how does the title of this post, “there may be a fool living in your house” apply to the Christian man or woman toady? Here’s how: a fool is someone who lives their life apart from the revealed word of God, which Christians understand to be the Bible. Certainly, someone who denies God’s existence is living the part of a fool but the application is much more broad than that. A Christian may for a moment act the part of a fool when they sin. Sinning is not only a betrayal of who we are in Jesus (1 Peter 2:9-11) and a forgetfulness of what we’re called to do (1 Peter 2:11-12) and it’s more serious than fickle, sinful affections. In that moment a Christian is choosing to dethrone God and place themselves on the throne and in so doing they are playing the part of a fool.

In light of Psalm 14 and Romans 3 who is the fool? Every person in the world, past, present and future. Because every person apart from God’s grace does not seek after God. There is no person who is good in the sense of being immune and untainted from sin. All persons are guilty, tainted, corrupt and sinful — a sobering reality of mankind.

In so doing, your record of a fool is credited to Jesus’ account and His perfect, blameless, righteous, and innocent record is credited to your account.

That’s good news my friend. Believe it. Live it. Share it.