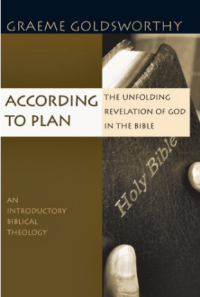 Graeme Goldsworthy has a tremendous gift for tying the various parts of the biblical story to the metanarrative of the whole Bible. In According to Plan: The Unfolding Revelation of God in the Bible, Goldsworthy provides an introduction to biblical theology. He attempts to show how the idea of God’s kingdom (God’s people, living in God’s place, under God’s rule) provides the needed framework for a comprehensive understanding of Scripture.

Goldsworthy outlines how the creation narrative (Gen 1–2) provides the pattern of the kingdom. God creates a people (Adam and Eve), prepares a place for them (the Garden), and they live under his rule (they are given one prohibition). The kingdom pattern is ruined when Adam and Eve believe the Serpent instead of God (Gen 3). After they rebel, God’s people are removed from God’s place and no longer enjoy the presence and rule of their Creator. However, God does not leave the world to spin out of control. He promises to crush the enemy (Gen 3:15–16). And, eventually, he makes kingdom promises to Abraham (himself an offspring of the woman) and his descendants (Gen 12:1–3). Someday in the future, God’s people will once again dwell in God’s place and enjoy his rule. Yet, the biblical narrative continues to include threats to the promises of God.

When the reader reaches the book of Exodus, it seems the enemy is plundering the promises. The people are in a foreign land. They live under foreign rule. And they do not sense the divine presence of their covenant Lord. Will the promises prevail? Is there sufficient reason to trust the Lord? Goldsworthy looks at the situation and offers a stunning and exciting interpretation of the narrative.

At the beginning of Exodus we find the descendants of Israel in Egypt having multiplied to become a great crowd of people. The land is now goverend by a king who has no regard for their services rendered by Joseph. Raher he sees the Israelites as an internal threat to the security of the nation, and makes them slaves of the state (Ex 1). Once again the reality of the promises of God seems to recede out of reach. Certainly Abraham’s descendants are now many, but they are in the wrong place and under the wrong rule. To all outward appearances Israel’s God is powerless to keep faith with his chosen, and unable to prevent foreign gods from exercising rule over his people. (Goldsworthy, 131)

Thankfully, as we know from the biblical narrative, God acts to redeem his people. He hears their cries, remembers the covenant with Abraham, Isaac, and Jacob, and rescues Israel (Ex 2:23–25). Goldsworthy provides the following commentary on the exodus of Israel from the foreign land of Egypt.

As we reflect on the elements of redemption revealed in the exodus event, we are able to see why God led Joseph and his brothers to Egypt. Posession of the Promised Land and the freedom to be the people of God is not a matter of simply walking over the boarder into the kingdom of God, and much less is it something we are born into. The Israelites, even as God’s chosen people, are by nature aliens and strangers to God’s kingdom because they are Adam’s children outside of Eden. God chose to reveal his redemptive purpose in the context of Israel’s history. Thus the captivity in Egypt and the exodus demonstrate the captivity of the human race to the powers of evil, and the necessary powerful work of God himself to rescue his people from that awful slavery. When God the warrior fights for his people against the enemy, victory is certain (Ex 14:14; 15:1–3). (Goldsworthy, 136).

That last line is comforting and worshipful.

“God the warrior fights for his people” and the result is “victory.”

Then, the redemptive event of the exodus becomes a pattern for understanding the future work of Jesus Christ (cf. Matt 2:14–15; 1 Cor 5:7). We are by nature enemies of God (Rom 5:10) and slaves to sin (Rom 6:17), born outside the borders of God’s kingdom (cf. Eph 2:12, 19). Entrance into God’s kingdom is not something we gain by our own strength or claim as a universal human right. Rather, entrance into this kingdom comes by grace through faith in Jesus Christ alone (Eph 2:8–9; John 14:6). It is God the Son who has fought for us and won the day. And the victory is certain because it is finished (John 19:30).